The Nature, Scope and Importance of Macroeconomics

The term 'macro' was first used in economics by Ragner Frisch in 1933. But as a methodological approach to economic problems, it originated with the Mercantilists in the 16th and 17th centuries.  They were concerned with the economic system as a whole.  In the 18th century, the Physiocrats adopted it in their Table Economies to show the 'circulation of wealth' (i.e., the net product) among the three classes represented by farmers, landowners and the sterile class.  Malthus, Sismondi and Marx in the 19th century deal with macroeconomic problems.  Walras, Wicksell and Fisher were the modern contributors to the development of macroeconomic analysis before Keynes.  Certain economists, like Cassel, Mar shall, Pigou, Robertson, Hayek and Hawtrey, developed a theory of money and general prices in the decade following the First World War.  But credit goes to Keynes who finally developed a general theory of income, output and employment in the wake of the Great Depression. 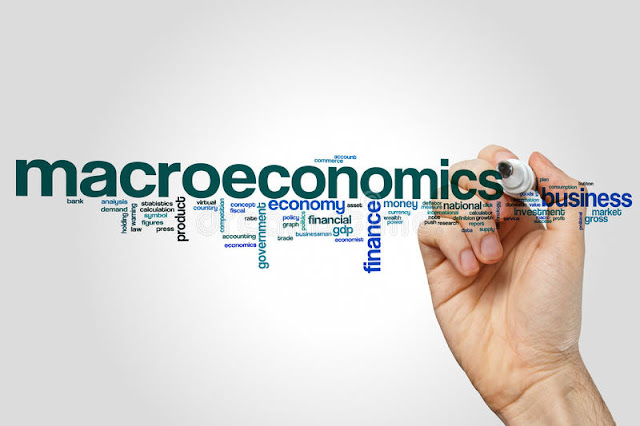 Macroeconomics¹ is the study of aggregates or averages covering the entire economy, such as total employment, national income, national output, total investment, total consumption, total savings, aggregate supply, aggregate de mand, and general price level, wage level.  and cost structure.  In other words, it is aggrega tive economics which examines the interre lations among the various aggregates, their determination and causes of fluctuations in them.  Thus in the words of Professor Ackley, "Macroeconomics deals with economic affairs' in the large, it concerns the overall dimensions of economic life. It looks at the total size and shape and functioning of the" elephant "of economic experience, rather than  working of articulation or dimensions of the individual parts. It studies the character of the forest, in dependently of the trees which compose it."

Macroeconomics is also known as the theory of income and employment, or simply income analysis.  It is concerned with the problems of unemployment, economic fluctuations, inflation or deflation, international trade and eco nomic growth.  It is the study of the causes of unemployment, and the various determinants of employment.  In the field of business cycles, it concerns itself with the effect of investment on total output, total income, and aggregate employment.  In the monetary sphere, it stud ies the effect of the total quantity of money on the general price level.  In internationaltrade, the problems of balance of payments and foreign aid fall within the purview of macroeconomic analysis.  Above all, macroeco nomic theory discusses the problems of deter mination of the total income of a country and causes of its fluctuations.  Finally, it studies the factors that retard growth and those which bring the economy on the path of economic development.

Scope and Importance of Macroeconomics

As a method of economic analysis macroeco nomics is of much theoretical and practical importance.

(1) To Understand the Working of the Economy. The study of macroeconomic variables is indispensable for understanding the working of the economy.  Our main economic problems are related to the behavior of total income, output, employment and the general price level in the economy.  These variables are sta tistically measurable, thereby facilitating the possibilities of analyzing the effects on the functioning of the economy.  As Tinbergen serves, macroeconomic concepts help in "making the elimination process understandable and transparent".  For instance, one may not agree on the best method of measuring differ ent prices, but the general price level is helpful in understanding the nature of the economy.

(2) In Economic Policies.  Macroeconomics is extremely useful from the point of view of economic policy.  Modern governments, espe cially of the underdeveloped economies, are confronted with innumerable national prob lems.  They are the problems of overpopula, inflation, balance of payments, general underproduction, etc.  The main responsibility of these governments rests in the regulation and control of overpopulation, general prices, general volume of trade, general outputs, etc.  Tinbergen says: "Working with macroeco nomic concepts is a bare necessity in order to contribute to the solutions of the great prob lems of our times." No government can solve these problems in terms of individual behavior.  Let us analyze the use of macroecomomicstudy in the solution of certain complex eco nomic problems.

(i) In General Unemployment.  The Keyne sian theory of employment is an exercise in macroeconomics.  The general level of employ ment in an economy depends upon effective demand which in turn depends on aggre gate demand and aggregate supply fuctions.  Unemployment is thus caused by deficiency of effective demand.  In order to eliminate it, effective demand should be raised by in creasing total investment, total output, total income and total consumption.  Thus, macroeconomics has special significance in studying the causes, effects and remedies of general un employment.

(ii) In National Income.  The study of macroeconomics is very important for evaluating the overall performance of the economy in terms of national income.  With the advent of the Great Depression of the 1930s, it became necessary to analyze the causes of general overproduction and general unemployment.  This led to the construction of the data on national income.  National income data help in forecasting the level of economic activity and to understand the distribution of income among different groups of people in the econ omy.

(iii) In Economic Growth.  The economics of growth is also a study in macroeconomics.  It is on the basis of macroeconomics that the resources and capabilities of an economy are evaluated.  Plans for the overall increase in national income, output, employment are framed and implemented so as to raise the level of economic development of the economy as a whole.

(iv) In Monetary Problems.  It is in terms of macroeconomics that monetary problems can be analyzed and understood properly.  Fre quent changes in the value of money, infla tion or deflation, affect the economy adversely.  They can be counteracted by adopting mone tary, fiscal and direct control measures for the economy as a whole.

(v) In Business Cycles. Further macro-economics as an approach to economic problems started after the great depression. Thus its im portance lies in analyzing the causes of eco nomic fluctuations and in providing remedies.

(3) For Understanding the Behavior of In Dividual Units.  For understanding the behavior of individual units, the study of macroeconomics is imperative.  Demand for individual products depends upon aggregate demand in the economy.  Unless the causes of defi ciency in aggregate demand are analyzed, it is not possible to fully understand the reasons for a fall in the demand of individual products.  The reasons for increase in costs of a particle lar firm or industry cannot be analyzed with out knowing the average cost conditions of the whole economy.  Thus, the study of individual units is not possible without macroeconomics.Conclusion.  We may conclude that macroeco nomics enriches our knowledge of the func tioning of an economy by studying the behavior of national income, output, investment, saving and consumption.  Moreover, it throws much light in solving the problems of unem ployment, inflation, economic instability and economic growth.

Follow this blog from the menu button for more information