with the increasing market orientation of the Indian economy, investors value a systematic assessment of two types of risks, namely " business risk" arising out of the "Indian economy" and linkages between money, capital and foreign exchange Markets and "payments risk". with a view to protect small investors, who were the main target for unlisted corporate debt in the form of fixed deposit with companies, credit rating has been  made mandatory.
India was perhaps the first amongst developing countries to set up a credit rating agency in 1988.The function of credit rating was institutionalised when RBI made it mandatory for the issue of commercial paper (CP) and subsequently by SEBI, when it made credit rating compulsory for certain categories of debenture and debt instruments. In june 1994, RBI made it mandetory for non-banking financial companies.(NBFCs) to be rated.Credit rating is optional for public sector undertakings(PSUs) bonds and private placed non-convertible debentures upto rupees 50 million.Fixed deposits of manufacturing companies also come under the purview of optional credit rating.

The first mercantile credit agency was set up in New York in 1841 to rate the ability of merchants to pay their financial obligations. Later on, it was taken over by Robert Dun. This agency published its first rating guide in 1859. The second agency was established by John Bradstreet in 1849 which was later merged with first sgency to form Dun & Bradstreet in 1933, which became the owner of Moody's Investor's service in 1962. The history of Moody's can be service and published his 'Manual of Railroad Securities'.

sandard statistics company were setup in 1924 and 1922 respectively. Poor and stanishing company published its first rating guide in 1916. Subsequently fitch publdard Early 1920's saw the expansion of credit rating industry when the poor's publishing company and stmerged together in 1941 to form standard and poor's which was subsequently taken over by McGraw Hill in 1966. Between 1924 and 1970, no major new agencies were set up. But since 1970's, number of credit rating agencies have been set up all over the world including countries like Malaysia, Thailand, Korea, Australia, Pakistan and Phillipine etc. In India, CRISIL (Credit rating and information Services of India Ltd.) was set up in 1987 as the first rating agency of india ltd.) in 1991, and credit Analysis and research ltd. (CARE) in 1994. All the three agencies have been promoted by the all india financial institutions. The rating industry have established their credibility through their independence, professionilism, continuous research, consistent efforts and confidentiality of information. Duff and phelps credit rating india (P) Ltd. in 1996. 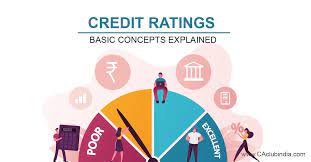 Credit rating is the opinion of the rating agency on the relative ability and willingness of the issuer of a debt instrument to meet the debt service obligations as and when they arise. Rating is usually expressed in alphabatical and alphanumeric symbols. Symbols are simple and easily understood tool which help the investor to differentiate between debt instruments on the basis of their  underlying credit quality. Rating companies also publish explanations for their symbols used as well as the rationale for the ratings assigned by them, to facilitate deeper understanding.
In other words, the rating is an opinion on the future ability and legal obligation of the issuer to make timely payments of principal and interest on a specific fixed income security. The rating measures the profitability that the issuer will default on the security over its life, Which depending on the instrument, may be a matter of days or thirty years or more.
In fact, the credit rating is a symbolic indicator of the current opinion of the relative capability of the issuer to service its debt obligation in a timely fashion, with specific reference to the instrument being rated. It can also be defined as an expression, through use of symbols, of the opinion about credit quality of the issuer of security/instrument.