Black money is simply income on which taxes have not been paid.  Every time you buy something without a bill, you may be facilitating black money generation.

While all black money generation is not due to corruption, all corrupted results in black money.  When a government servant gets a bribe for a favor done, then he generates black money since that amount will not be shown for tax.  That is a clear case of corruption generating black money.

As stated in the introduction, when you go to a doctor and pay him say Rs.  500 in cash without receipt orbuy petrol without a bill, then you are generating black money since the doctor or the petrol station may not show your amount as received and that amount is therefore not counted for tax purposes.  But this act of buy ing without a receipt or bill does not involve corruption.

Generally, the money, which is earned by means of illegal methods, is considered as black money, and the money earned by legal methods but hidden for paying income tax (also called tax evasion), is also called black money.  Both these instances have been discussed in the situations above.

We cannot deny the fact that black money and corruption feed into each other, spread across the nation and penetrate deeply into the economic system.  It is very difficult to eliminate corruption, not only in India but also in most of the countries across the world.  In fact, corruption has existed since ancient times. 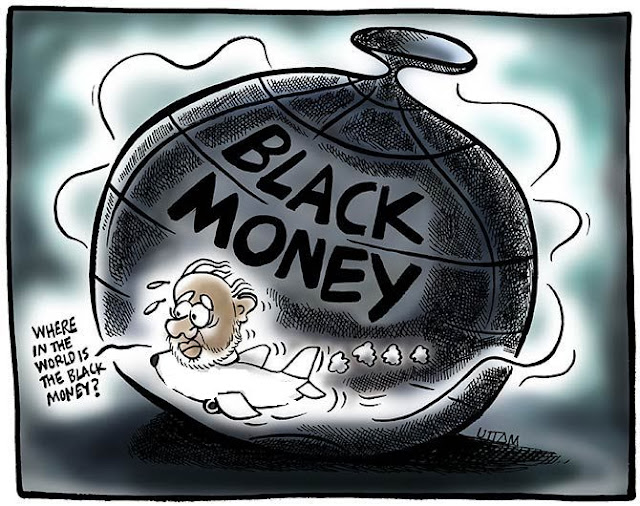 Black money is earned through ille gal activity and, as such, is not taxed.  Recipients of black money must hide it, spend it only in the underground economy, or attempt to give it the ap pearance of legitimacy through illegal money laundering.

This definition of black money is in consonance with the definition used by the National Institute of Public  Fi nance and Policy (NIPFP).  In its 1986 report entitled Aspects of Black Econ omy, the NIPFP defined 'black income' as 'the aggregates of incomes which are taxable but not reported to the tax authorities'.  Further, black incomes or unaccounted incomes are 'the ex tent to which estimates of national income and output are biased down wards because of deliberate, false re-porting of incomes, output and trans actions for reasons of tax evasion, flouting of other economic controls and  relative motives.'

All these terms usually refer to any income on which the taxes imposed by government or public authorities have not been paid.  Such wealth may consist of income generated from le gitimate activities or activities which are illegitimate.  Smuggling, illicit trade in banned substances, counter feit currency, arms trafficking, terror ism, and corruption are examples.

It would also include all market based legal production of goods and services that are concealed from pub lic authorities for the following reasons:

2. To evade payment of other statutory contributions

4. To evade complying with laws and administrative procedures.

For the purpose of discussion, 'black money' can be defined as assets or resources that have neither been reported to the public authorities at the time of their generation nor disclosed at any point of time.  during their possession.

Sometimes, it is argued that black economy is a result of lack of free markets or economic freedom or due to high taxes.  But as pointed out by Prof.  Arun Kumar, there is the stance of a highly taxed economy like Sweden, which has historically had a tiny black economy.

1. High rate of tax: When a country levies a high rate of tax, corpo rates and individuals start looking for options of tax evasion.  Thus, black money is generated and invested in tax havens. The increas ing burden of compliance also gives a strong reason to gener ate black money.  Studies indicate that countries with proper regulations have a smaller rate of black money being generated.  Also, developing countries have relatively higher levels of tax com pared to developed countries also leads to greater tax evasion in such countries.

2. Corruption: Corruption is one of the biggest reasons for the gen eration of black money and in fact, corruption goes hand - in hand with black money.  Developed countries like USA, Canada and Europe generate black money through illegal activities such as drug trade, illegal mi gration etc. , whereas Asian and African countries generate black money through multiple sources.  Corruption of public resources, trade - based black money due to non - reporting of incomes or profits and inflation of expenses and through a host of criminal activities such as illicit manu facturing of counterfeit goods, smuggling, extortion, cheating and financial frauds, illicit nar cotics trade, printing and circulation of fake currency, illicit man ufacturing and trade in arms.  , ammunition and explosives etc.  are all means of generating black money.

3. Procurement can generate black money: An interesting study by Glenn T. Ware and others sug gested that corruption in pro curement is a major issue in many countries.  Improper bid se lection, the involvement of mid dlemen, the greed of procure ment officials, former govern ment officials acting as suppliers etc.  are given as some reasons.

4. Suppression of receipts, infla tion of expenditure: The pri mary method of generation of black money remains suppres sion of receipts and inflation of expenditure.  The suppression could be over a range of businesses and industrial activities which are covered by what may be called 'primary' enactments to regulate sale receipts, actual production, charging amount in excess of statutory amounts, etc.  Duties are imposed on manufac tured goods through the Central Excise Act by the central governing ment.  However, the states of the Indian Union have a wide array of powers under List - II of the Constitution.  Consider the exam ple of two states, namely Uttar Pradesh (U. P.) because of its large population and Madhya Pradesh (M. P.).  In these two states, the government controls economic activity by way of levying taxes, and secondly, by way of control ling certain industrial and com mercial activities.  U. P. has the Sales Tax Act of 1948 and M. P. has Commercial Tax Act of 1994. U.P.  has an Entertainment and Betting Tax Act and Lux ​​ury Tax on hotels.  Both states have an Excise Act by which taxes are levied on liquor manu facture and a Stamp Act to dealwith collection of stamp duty from registration of instruments for transfer of immovable prop erties.  The primary and funda mental reason for suppression of receipts or values ​​is to lower the incidence of tax under the heads as indicated in these acts.  These states also have laws to regulate certain trades.  U.P.  has the Regulation of Cold Storage Act, the Regulation of Moneylending Act, the Sugar Cane (Regulation) Act and the Supply and Purchase Tax Act.  The Madhya Pradesh Tendu Patta Adhiniyam, 1964 regulates the trade of tendu leaves by the creation of a state monopoly in the trade.  Specific provisions in these acts also create situations where receipts are suppressed and expenditure inflated.

5. Issues of permit and licenses: As the power lies with govern ment officials for the issuing of licenses and permits to public and corporate institutions, this results in bribes to 'push' files in the queue faster and now it is al most done  thing in governmentoffices to take bribes to speed things up thus, generating black money.

6. Ineffective tax laws: While tax laws are in place, they are in effective and irrational when it comes to implementation.  The rising burden of taxation, both actual and perceived, owing to faulty implementation provides a strong temptation to participa tion in generating black money.  Lack of tax morality, or non - com pliant attitude of the citizenry to wards tax laws, also tends to crease the size of the black economy.

7. Political factors: The political system of any country also has a bearing on the amount of black money generated.  If the ruling government is stable and abides by the rules then they can insist on the people to follow the rules like it is in developed countries.

Follow my blog from the menu button for more information